Blessed to Be a Blessing

Leaving a Legacy for Ranch Kids 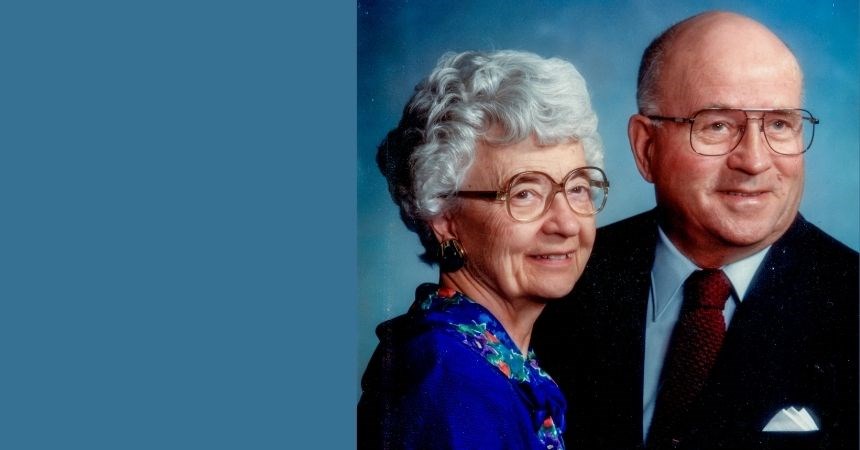 Lorens and Mabel Kingstad were hardworking children of immigrants who grew up during the Depression and the Dirty Thirties. According to their children, Tim Kingstad and Naomi Kingstad Murphy, they lived simple, frugal, and humble lives of "faith active in love."

Yet, through their quiet and unassuming lives, they made a lasting impact on their children, the people they served through their church and various volunteer activities, and the children at Dakota Boys and Girls Ranch.

Lorens and Mabel grew up 15 miles apart northwest of Williston, ND—Lorens on a farm south of Zahl and Mabel on a small farm south of Alamo. Mabel then earned a bachelor's degree in English at Augsburg College in Minneapolis, MN. After teaching a year in Tagus, ND, she took a job in Zahl, where she met Lorens.

Tim remembers his Dad saying that he quickly knew that Mabel was "the one" for him, but it took a while for him to get her to agree! In the meantime, Lorens served in the Navy during WWII, and spent months in the hospital recovering from malaria and dengue fever contracted in New Guinea. Mabel also moved on during those years, teaching in schools in Minnesota and Washington, before returning to Zahl to marry Lorens in 1949.

Living in Zahl, and then Williston, the couple worked hard to raise their children and serve their God; and tithing was central to their beliefs.

Naomi remembers both of her parents as being adamant about giving. Tim remembers his Dad telling him that tithing was always part of their marriage "even when they were out on the farm near Zahl and starting with nothing. Whenever they sold anything—crops, milk, chickens, eggs, whatever—they would take money aside and put it in a coffee can for the church."

Giving of their time and treasure was a way of life for the Kingstads. Mabel channeled her passion for teaching into Christian education. She taught Sunday School, served on the Christian Education committee at church, and taught classes (and other teachers) for the Bethel Bible Series. She was the first female deacon at Our Redeemer's Lutheran Church, and was an active member of women's church organizations throughout her life.

Lorens wasn't quite as involved because he was a full-time rural mail carrier, part-time farmer, and for a short while, the owner of a water softener company.

Lorens did find time to serve on the church council and the boards of Bible camps at Brush Lake (Montana) and Epping, ND (now Upper Missouri Ministries). Naomi suspects it was through the Epping camp that they first learned about Dakota Boys and Girls Ranch. Together, Lorens and Mabel were founding members of Good Shepherd Lutheran Church, Williston, and delivered Meals on Wheels two to three days a week for over 20 years.

"They embedded in both of us the need to bless others because we are blessed," Naomi said.

Tim and Naomi said their parents chose to support the Ranch both during their lifetime and in perpetuity through the Kingstad Family Endowment because they recognized some kids don't have the same opportunities they were able to give their own children.

"Naomi and I had a very stable, healthy childhood. It wasn't until later in life that I even realized that right in our town there were kids who had the kinds of childhoods kids at the Ranch have experienced," Tim said. "In the 60s, when Mom and Dad started giving to the Ranch, it was probably one of the few places combining the psychotherapeutic [services] and a Christian environment. That was important to them."

Under the terms of Mabel's will, the Kingstad Family Endowment was created in 2017 with a portion of Lorens and Mabel's estate. Tim and Naomi requested that the earnings on the endowment specifically go to support the equine (horse) therapy program at the Ranch.

Naomi said that they chose this program because they have enjoyed the love of animals in their own lives. "Dogs and other pets have been such a big part of our lives and the lives of our children, so it was easy for us to see how animals can provide help to children struggling with life."

Tim agreed and added, "I have struggled with depression throughout my life, and dogs have been an important part of my 'therapy' nearly every day."

He also noted that his daughter and son-in-law now have horses, including a pair of Norwegian Fjords, similar to two of those in the program at the Ranch.

"An endowment is particularly appropriate for an estate," said Tim, a retired attorney. "The principal of the gift is held in trust in perpetuity, with the annual earnings distributed to the charitable beneficiary. That way you can continue to do good, forever, supporting the same things you did during your lifetime."

He also noted that an endowment allows future generations to contribute to the fund, through lifetime gifts or in their own estates. "So, children, grandchildren, and beyond can become part of the legacy established by their parents or grandparents – making it truly a family gift that goes on for generations."

Because the distribution amount is based on a three-year rolling average of the fund value, the first distribution from the Kingstad Family Endowment will be made to the Ranch Horse Program later this year.

"The first distribution being made in 2020 is an interesting historical echo," Tim said. "Mom was born on November 19, 1918, and she almost died during the Spanish Flu pandemic. I think she would feel good about the first distribution coming at a time where the Ranch has extra needs due to another pandemic."