A Future He Never Imagined 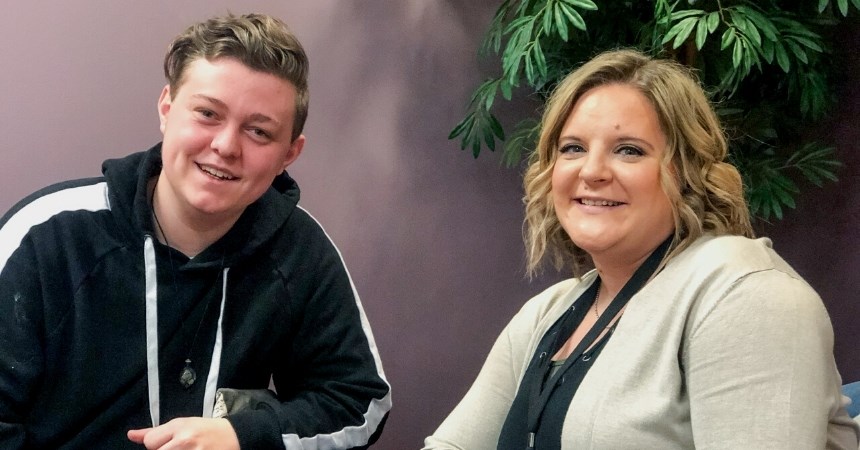 Jeremiah, a funny, delightful, and handsome young man, used drugs to "dumb himself down."

More than anything, Jeremiah wanted to be part of a group. And to be accepted by his peers, he thought he had to appear less intelligent. Drugs took away his anxiety, "dumbed him down," and helped him fit in.

But the drugs took a toll on Jeremiah's health and relationships.

"Drugs put me into psychosis," he said. "I have a thing called psychosis with orientation, which means I know where I am and know what is going on around me. But I can tell you a story about a giraffe on the moon, or that my mom beats me (when she doesn't) and totally believe it."

"I was stealing from my parents. I ran away. And I got angry over the littlest things."

When they could no longer handle Jeremiah's behaviors and didn't know where else to turn, Jeremiah's parents relinquished their parental rights so he could go into foster care and receive the help he needed.

From there, he landed at Dakota Boys and Girls Ranch. At first, he didn't want help.

Angela Schon, Jeremiah's case manager at the Ranch said, "At the beginning of treatment, Jeremiah told us what he thought we wanted to hear and had a fairly long "honeymoon" phase. Eventually, he realized we weren't going to discharge him until he actually worked through the issues that brought him to treatment in the first place. It wasn't easy for him, and there were a lot of ups and downs, but he did work hard to make positive changes in his life."

"I acted like I was accepting the help, but in my mind, I know I wasn't," Jeremiah said.

Now, in his second time at the Ranch, Jeremiah wants the help he needs. "I want to get stuff done. I want to be able to communicate efficiently and to have friends, good friends. My therapists at the Ranch are really helping me with those things. They are helping me with pretty much anything you can name that a young adult needs to live independently."

In therapy, Jeremiah has learned to talk through his uncomfortable feelings and emotions. "I think the only way to go forward is to be uncomfortable when you're talking about something. If you stop talking every time you're uncomfortable, it's not going to help you. You have to just sit there and cry and work through things."

While at the Ranch, Jeremiah also developed coping skills, learned how to interact with other people, and worked hard to repair and rebuild relationships with his parents.

"I wouldn't say my dad and I have a perfect relationship, but we have a good one. I'm in contact with him now and we talk regularly on the phone," he said.

"And my mom is just amazing. I've said some pretty hurtful things and she still sticks around. She loves me. She helps me learn. And now I'm helping her with the technology aspect of getting her business going."

He also learned the skills he needs to live on his own. But maybe most importantly, the Ranch has helped Jeremiah visualize his future.

"My life would be really different without the Ranch. I think I would still be wanting to use. I didn't think I would ever go to college. I thought school was dumb and I didn't need it," Jeremiah said. "But people at the Ranch have helped me visualize that I can go to college if that's what I want."

When Jeremiah left the Ranch on his 18th birthday to live independently, he had already been accepted to Bismarck State College for cybersecurity, which, according to Angela, is the thing he loves the most.

"I am excited to see where the future takes him," Angela said, "and I know he'll reach his goals if he continues to push himself in this positive direction."

As Jeremiah prepares for the next step in his life, he wants Ranch donors to know how much they are making a difference.

"I want to say thank you to Dakota Boys and Girls Ranch donors. The Ranch helps kids' dreams come true, like mine, to go to college and to achieve everything I want in life. Some kids may not realize it's helping at first, I didn't. But, it does if you let it. And all of the donations make it possible."