He Writes the Songs 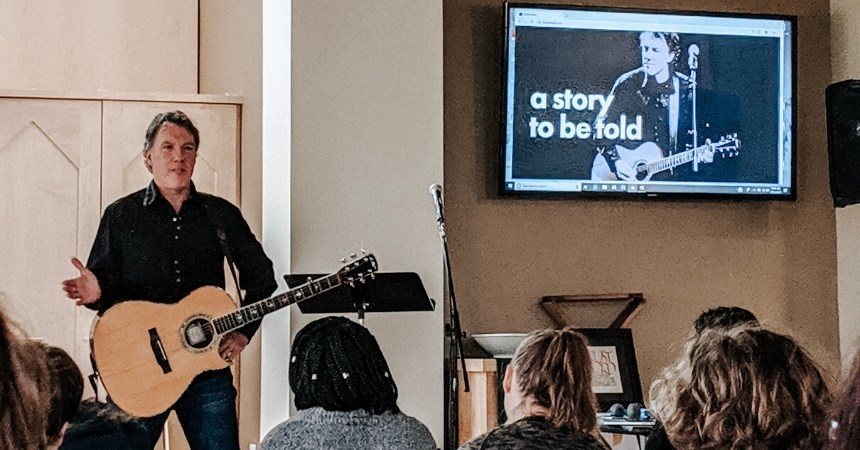 Dr. Monte Selby presented at a recent Principal's Conference and after his talk, a principal stopped to tell him about one of his students. This student, who we'll call Thomas, attended Dakota Memorial School, the on-campus school of Dakota Boys and Girls Ranch, when Selby was visiting to write songs with Ranch kids.

Thomas wrote a song with Selby called "Not Mine," and his principal said it made such an impact on Thomas, he still talks about it two years later.

You won't amount to anything boy, and that's a fact.

So I'll prove them wrong. I'll show them it's a lie.

'Cause those are only their words. Not mine."

Thomas' principal said, "That kid is going to graduate this spring, against all odds. I'm coming out of my skin I'm so pumped about this!"

Thanks to the generous donors who make it possible, Selby, an educator, singer, and Grammy-award winning songwriter, spends several days writing songs with Ranch kids each year. He connects with students on a personal level, engages them in authentic musical experiences, and inspires them to pursue their own artistic expression. Most importantly, he listens to the kids' stories and helps them turn memories and hopes into songs.

Although Selby claims nothing about his current career path has been intentional, his background as a teacher and school administrator, combined with a love for music, prepared him perfectly to write and perform with kids.

Selby grew up in a tiny town in northwest Oklahoma. His dad was a school superintendent and his mom a K-12 music teacher. Selby said everyone in his family was musical. Selby learned how to play guitar early on and wrote his first song when he was nine. They didn't put on family concerts or any formal performances, but wherever they went it was just assumed one of them would provide the entertainment.

When it came time for college, Selby followed in his parent's footsteps and went into teaching.

"When I started teaching, songs were just popping out of me," Selby said. "Sometimes during student programs, I would throw in an original song."

Word got out and principals and superintendents started inviting him to kick off school events with a few songs. His education career snowballed from there and by the time Selby had earned his master's degree and worked as a principal, he was presenting at regional, national, and international conferences about making a difference for middle school kids. Eventually, he went back to school for his doctorate in School Administration and spent nine years as a professor of school leadership at Emporia University in Emporia, Kansas.

Throughout this time, Selby wrote songs. "I wrote songs for myself. Then I started writing songs about kids, and then with kids a bit. Somewhere around the year 2000, schools started inviting me to write songs with their kids."

Selby came to North Dakota for the first time in 2006 after Marcia Bartok, now Vice President of Education at the Ranch, met him at a middle school conference. Bartok invited him to Williston, where she was principal at the time. When she came to the Ranch in 2013, she called Selby to ask what he thought about writing with the kids at the Ranch. Up until then, he'd primarily written songs with groups of kids. Marcia said it would be different at the Ranch and asked if he'd be willing to write one-on-one with the residents.

Not one to back down from a challenge, Selby made the trek to Fargo, ND, and the kids captured his heart.

"I'm bewildered by the honesty of the kids. One time I was at the Ranch in Minot and one of the boys says to me, 'I need to write a song about my little brother dying on a 4-wheeler.' We finished the song and he asked if we could play it for one of his teachers. She just stared at me and said, 'This little guy told you something he hasn't told anyone here—he wouldn't talk about it.' Just wide-open honesty."

Selby says he has learned a lot from his ongoing work at the Ranch, much of it from the kids. "Knowing them has opened up my world as far as knowing what kids deal with. I see a lot of kids who wouldn't have a chance without the Ranch. I've been all over the country and there is nothing like the Ranch anywhere else."

The last time Selby was at the Ranch in Minot, he wrote 27 songs with kids in just over a week. He was scheduled to stay a week, but in the middle of the trip, he realized he couldn't write with all the kids who wanted to write a song. He asked if he could stay a few more days so they would all have the chance. The kids shared their thoughts about the experience:

"I wrote a song for the first time. I never thought I could do that. I'm only fourteen. Just think what I'll do next!"

"Monte helped me realize I'm not weird. What I'm feeling is normal. Writing it down helped me make sense of things."

"This was the best day of my life. My mom listened to my song on YouTube and she loved it! She said it was the best present I've ever given her."

When Selby gave the closing concert, he performed all 27 songs, plus one extra he wrote to his wife, Michelle, about the kids and his experience at the Ranch, that left the entire crowd in tears. Selby's words and music illustrate his love for Ranch kids and his passion for helping them heal using the power of music.

Good night Michelle. I've had a change of plans

To write a few more songs. Here, in the promise land.

It's been amazing. I wish you could meet

All these kids. Just so you could see

That I see beautiful in each and every one.

I hear their melodies and chosen words

Their favorite songs and painful hurts

And how they're different, scared, and brave

And the one way I think they're all the same

What's my favorite song. It's the one that I just wrote

I wrote it with a kid who has a plan

Thinking 'bout the future here in the promise land

Where I see beautiful in each and every one.

I hear their melodies and chosen words

Their favorite songs and painful hurts

And how they're different, scared, and brave

And the one way I think they're all the same

This article was originally published in Ranch Voice: Spring 2020.