A Safe Place to Heal 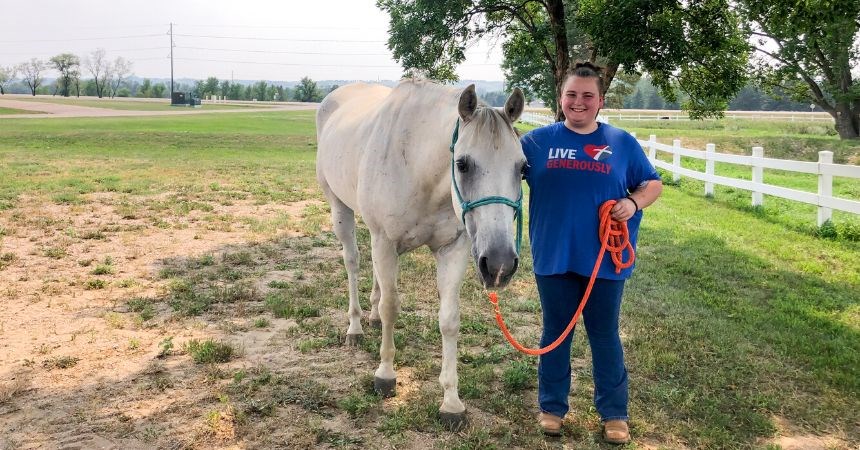 Shanaye didn't experience much safety in her childhood—either at home or at school.

"Until my dad moved out, home was a really hostile and scary place," Shanaye said. "I was abused by my father for a good portion of my life. It was just horrible."

On top of that, her mother's chronic health issues were hard on Shanaye and her younger brother.

"She would come home very sick from her treatments, and we had to take care of her. My dad didn't really help, so I was her caregiver. He would just ignore all the signs that I had depression or that my mom was getting severely ill again."

School wasn't much better, even though Shanaye excelled in her classes. "I was bullied quite heavily until about my freshman year," she said.

By the time Shanaye was 16, the bullying had stopped, and her father was no longer a part of her life, but she continued to carry the pain and suffering caused by a lifetime of trauma. She was depressed, suicidal, and had quit doing the activities she previously enjoyed.

"I was in and out of hospitals all the time," Shanaye said. "I was barely talking to my family, and it was like I wasn't living my life anymore."

Still, Shanaye was not happy about coming to the Ranch. She didn't think she needed to be here, and in her own words, "was very defiant."

But, with a place to feel safe and secure, family therapy, and a lot of people who cared, Shanaye settled in and learned to love herself, built strong relationships with her brother and mother, and found a reason to live.

"Therapy was hard for me," she said. "But when I did trauma therapy, it changed everything. I was able to talk about everything that happened and work through it with my therapist. I'm still processing things and I still have flashbacks, but things are so much better than they were. Everything has changed since I came to the Ranch. I've grown so much. I've learned new skills, and I've really grown into the person I am now."

As she left the Ranch to go home late last year, Shanaye said she took many things with her. One of those things is her faith.

"When I got here, I was at the lowest point in my life, and even though I'd been going to church since I was a little girl, I had no faith. I didn't believe in anything. I turned to God at the Ranch because of Pastor Rick and Deaconess Kelly. I will continue to practice things, like prayer, that are a part of my faith. That will help me be stronger."

"The other thing I took with me is how much the Ranch worked with me to get my diabetes and mental health under control. To be honest, if it weren't for the Ranch, I'd probably be dead by now," Shanaye said.

"I saw myself as having no future. Now I see myself graduating from high school and continuing my education to become a clinical psychologist or psychiatrist. My life has become brighter and worth living."

In January, Rev. Rick Jones, Chaplain and VP Spiritual Life at the Ranch, attended the North Dakota District Convention of The Lutheran Church—Missouri Synod and returned with an update on Shanaye.

Rev. Jones said, "Shanaye's pastor approached me at the convention today to thank us for everything we did for her. He said she returned to the community with joy, greater determination for self-success, and as he put it, 'more alive in her faith than I have ever seen'."

What am I thankful for?
By Shanaye

People ask me that all the time
Whether it be food or my cat, thankfulness comes from the heart.
I am always thankful for three things. Faith, Family, Treatment.
Faith has saved me so many times. It has saved me from myself and hurting others.
Family has created a safe place for me to express myself.
It has also created multiple opportunities for me.
Treatment has saved my life.
It made me rethink my life and how much I truly love it.
Thankfulness can come out in many different ways.
You can do something for others or say a simple thank you to someone who has had an impact on you.
Learn to express your thankfulness so others can feel like they can express themselves.
So, what are you thankful for?

This article was originally published in Ranch Voice: Spring 2022.

Read more stories like this and explore other issues of Ranch Voice here.